When I volunteered to write the life story of local woman, Krystyna Porsz, I was a very reluctant biographer. I did it because no-one else could be found to do it, so I thought, “If I don’t do it, no-one will.” It seemed far too big a responsibility to me but I told Krystyna’s son I’d give it a go. I write fiction. I make stuff up. I assumed non-fiction would be completely different.

It turned out not to be so different after all. Although I had the facts of Krystyna’s life, they amounted to a few sheets of A4 paper, hardly enough for a book. So I had to build a structure to hang those facts on, very much like creating a plot for a work of fiction. My friend Agnieszka had visited Krystyna and I used her as a narrative device, so we see the story unfold through her eyes. This gave me much more opportunity to pad out the text while still being true to the available facts.

Writers of fiction know that characters are apt to take on a life of their own. They seem real to their creators and as authors we want to portray them in their best light. When you are writing a real person’s story, this becomes vitally important. The sense of responsibility the author feels is magnified. For me, writing about Krystyna, it was off the scale; here was a very old lady whose ability to communicate was seriously hampered by dementia. There wouldn’t be any chance of being able to discuss the book with her. There wouldn’t be any feedback. While I was writing the book, I kept thinking, “If this were my life story, would I be happy with how it’s being handled?” That was my benchmark all the time and I’m confident I kept to it.

Writing a real person’s story seems to provide you with a ready-made plot but you can’t simply make the book a record of the events in someone’s life. That would be dull. You still have a responsibility towards the reader to make it as compelling as possible so they want to keep reading, but you mustn’t sensationalise the facts to do that; this is someone’s life you are dealing with and you have to keep that in mind.

Third-party involvement can cause problems too, and in this case it held up the book for several months. This just doesn’t happen with make-believe characters and so I wasn’t expecting it and it was very frustrating. However, it hasn’t deterred me from tackling anything similar in the future because I now know I must address issues such as these before I commit myself.

Writing a real person’s story is a challenge. It’s hard work. But I recommend it, especially if that person’s life is drastically different from your own. It’s an enlightening experience. It will broaden your mind and test your ability as a writer. It will give you the opportunity to write something that really deserves to be written.

I only met Krystyna once but I made a point of shaking her hand before I left. I needed to physically touch someone who had survived the Holocaust, who had lived a history I had only read about or seen on black and white newsreels. Krystyna Porsz is a truly brave person. A survivor. I’m grateful not only to have met her, but to have had the honour of telling her story. 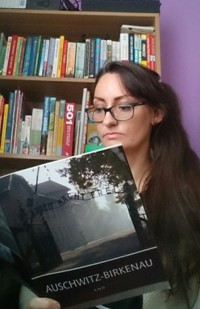